Little olive, I love you. 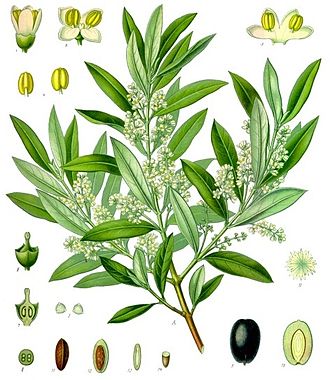 Although in my kitchen, they often look more like this: 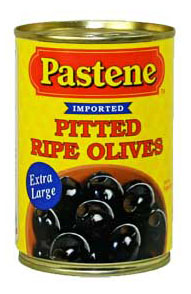 The problem is, once I open a can, I can eat a can full.  In a very short time. Let’s just say, there isn’t a storage issue…often not even a serving issue….

So I buy olives when I planning to sue them IN things, and then I can enjoy them over several days, which in the end, is more enjoyable.

Here’s a story for a sauce, according to wiki:

According to Annarita Cuomo, writer for Il Golfo, a daily newspaper serving the Italian islands of Ischia and Procida, sugo alla puttanesca was invented in the 1950s by Sandro Petti, co-owner of Rancio Fellone, a famous Ischian restaurant and nightspot

In the February 17th, 2005 edition of the newspaper, Cuomo says the moment of inspiration came, when near closing one evening, Petti found a group of customers sitting at one of his tables. Petti was low on ingredients and told them he didn’t have enough to make them a meal. They complained that it was late and they were hungry. “Facci una puttanata qualsiasi (Make any kind of garbage),” they insisted. In this usage, puttanata is an Italian noun meaning something worthless. It derives from the Italian word for whore, puttana.

At the time, Petti had nothing more than four tomatoes, two olives and some capers; the basic ingredients for the sugo. “So I used them to make the sauce for the spaghetti,” Petti told Cuomo.

Later, Petti included this dish on his menu as spaghetti alla puttanesca.

Some versions include anchovies, but I usually make this without the little fish.

Olive oil (two swirls around the pan)
4 smooshed garlic cloves
1 small onion, diced
1 28 oz can whole tomatoes (I like lots of chunky bits – use crushed tomatoes if you don’t OR if you’re topping spaghetti or another finer pasta shape)
Salt
½ cup pitted, chopped black olives (or more….)
1 Tablespoon capers
1 tsp red hot pepper flakes (more to sprinkle on top, if you like it hot – it keeps getting hotter, so don’t over-do if you’ll be saving some for another meal)
1/3 cup chopped parsley (or half a supermarket bunch, which seems to vary with the season and how much rain wherever THAT bunch of parsley was grown) OR 6-8 fresh basil leaves, shredded
1 # penne – or another sturdy pasta with nooks and crannies
Grating cheese

1 Put on the pot of water to cook the pasta in.
2 Swirl the olive oil in another pan; bring to medium heat and add the onions
3 When the onions begin to soften, add the garlic.
4 Add the tomatoes, squishing them through your fingers to make good sized chunks. Pour in the liquid from the can.
5 Season with salt, and simmer on low.
6 When the pasta water comes to the boil, salt that and boil the penne until al dente.
7 Add the olives, the capers, the parsley (or basil) and the red pepper flakes to the tomatoes.
8 Save out 1 cup of the pasta, drain the penne.
9 Add the penne to the sauce (or vice versa, depending on your pot/pan situation). Add some of the save water if the sauce needs thinning.
10 Serve with grating cheese. 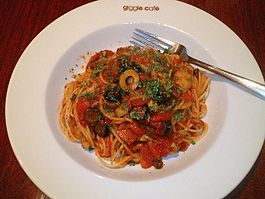