Not so Wicked Wayback….

Talking about 17th century cornbreads, some one recalled a 3 layer cornbread that her mother  used to make….and I recalled this one from Tassajara Bread Book 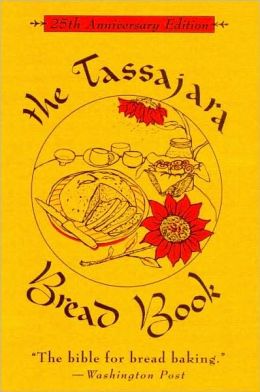 3 cup milk or buttermilk (my fave)

What’s so Boston about it? Probably the molasses…No one says….

Recipes for steam brown bread go back to the 1830’s…..and they mention lots of different containers. I think there’s a  timeline…. 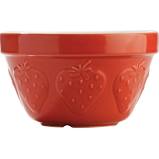 This is a steamed pudding mold – pour the batter in, snap on the lid and put it in boiling water

They need to be METAL coffee cans and not the plastic ones.

Then there was a more recent suggestion to save  cans that had safe seams….but I don’t buy that much food in cans, so I was perfectly contented to buy Boston Brown Bread in cans. 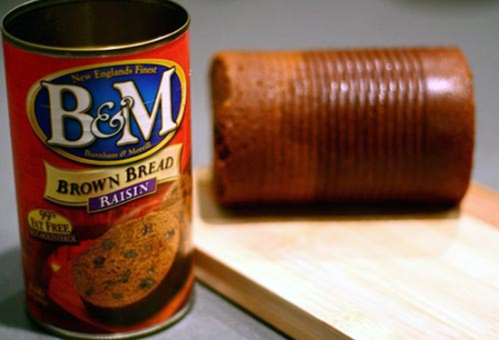 But then I saw a recipe for

MASON JARS BROWN BREAD MADE IN THE SLOW COOKER

The recipe is pretty much the same though the decades… 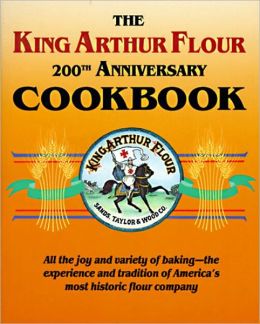 and the KAF website – all the same ingredients, different containers and method of cooking

(up to 1 cup of raisins is optional. I usually opt in)

This is the wide-mouth jar. Notice the straight side up to the opening. If you steam bread in here, the bread will come out when it’s done. This is an important detail. Should you use the wrong jar, serve it with a spoon……..like you meant to do it the whole time.

This is the regular jar – notice that while you could fish a pickle out, a bread would have a hard time slipping out. Hence the serve with a spoon option…..

I love my canning funnel. I use it all the time, wets and drys. Sometimes I can, too.

Back in the long ago olden days – the ’80’s – I pretty much cooked my through the McCalls Cooking School binders.

In 1986 I copied out the recipe for Old Fashioned Buttermilk Biscuits , which on their flip side  went by the alias

1/3 cup shortening (I now use butter)

These are not the only biscuits….my favorite quick and easy biscuit is made with Bakewell Cream. 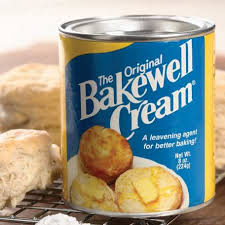 What is Bakewell Cream?

Bakewell Cream is a variety of baking powder developed by Bangor, Maine chemist Byron H. Smith in response to a shortage of cream of tartar in the U.S. during World War II. It is sold throughout the U.S., but is most popular in the state of Maine.

It sure does make a nice biscuit. But buying a can is now a commitment to biscuits – I’d hate to have throw any away. It’s available through King Arthur Flour, but I’ve also picked it up in the baking section of my local Stop & Shop.

ALSO – You can freeze the unbaked biscuits you might not be using right away….mix, shape and freeze. Bake them from the frozen state, 8 minutes instead of 5.

Meatless M0nday – unless if when you hear waffles, chicken isn’t far behind.

Chicken and waffles is not meatless, but a great supper any day of the week

In keeping with my resolution to reduce food waste, I had to come up with a way to use the buttermilk left over from the Irish bread baking of last week.

I once tried to cross reference my various recipes for just this sort of occasion…it was a hopeless muddle. I just wanted to group all the 1 cup of buttermilk recipes, all the 2 tablespoons of tomato paste recipes, all the…you get the picture.

But because I was reading Marion Cunningham, she neatly solved this buttermilk conundrum for me.

A waffle iron was one of the best small appliances I ever indulged myself in. I’ve actually worn out several. I don’t buy the high-end semi-industrial machine.

This waffle iron is a beaut – but at 200 bucks…I won’t eat 200 dollars worth of waffles in my lifetime!

I wait for a sale at Benny’s or Target, and get a perfectly respectable machine for under $30. It  has always served well for years. Now that I make waffles less often (read: New Years Day and maybe once or twice in the year, as opposed to maybe 25 or 30 times a year) my current waffle iron should last for decades.

This is a detail from a Pieter Bruegel painting about Carnevale. Notice the waffles as gambling booty and  headgear!

This is a 17th century waffle iron from France – It had to be heated over the fire. It’s hard to tell from this photo, this might be a wafer iron, which are waffles super thin, extra rich cousins.

Makes 6-8 waffles, depending on the size of your iron.

There’s more than one way to loaf around in Ireland….. 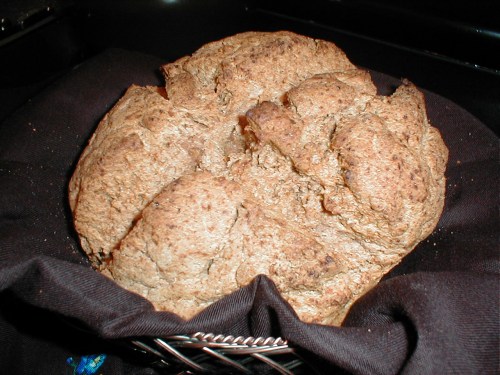 Irish Oatcakes (they’re not just in Scotland or Wales)

This is called Irish Bread with Golden Raisins, but it is really not bread, even if it shows up by that name  in The Boston Globe and even if Sheryl Julian and Julie Riven say it’s bread – it’s cake.

Most of what will be passing for Irish bread this week is actually cake – tea cake and seedy cake. If it has sugar, butter, seeds or raisins in it – it’s a cake and not a bread. It’s delicious and delightful, please enjoy,  allowing  me my Marie Antoinette moment by letting you all eat cake, but bread is bread and all that added stuff is cake.

Oatcakes have morphed into a kind of biscuit – or cookie – for the most part and are probably the most traditional bread of Ireland, although not the most famous. Oats and griddle baking go back to the medieval period when Ireland was saving civilization for the world. Don’t believe me? Read Thomas Cahill.

Blaa is a sort of yeasted white bread roll, perhaps named from the Norman ‘blanc’ when they stopped in to conquer  Ireland. Recently it was a headline in a New York Time travel article, Dining in Dublin from Boxty to Blaa ( http://www.nytimes.com/2014/02/02/travel/dining-in-dublin-from-boxty-to-blaa.html?_r=0 ) which includes  “In November, I spent a week in Dublin eating my way through some of these restaurants, most of which opened in the last few years. It was my fourth visit to this stately city of Georgian townhouses and lively pubs, and I’ve never eaten better.”  a sentence I hope to make my own some day.

Soda Bread is the kind of bread that screams “Irish Bread” in the month of March around here. It is a bread that is leavened with baking soda and not yeast. Commonly referred to as “quick bread” they go together quickly – no rising time – and are ready as soon as they come out of the oven. Many of them are best warm….and are improved the next day by toasting, because they do stale up almost as quickly as they cook.

Because milk is an important part of the Irish diet – it’s called the Emerald Isle because of all the grass that grows there, which I great fodder for cows, so the butter and beef of the country is not a cliché, but an important part of the culinary landscape for centuries – Soda bread is often made with sour milk or butter milk. The slight acidity level of this liquid actually makes the soda work better.

The classic Soda Bread is a pound of flour and a pint of sour milk, a spoonful of soda and a little salt. Mix together, form into a rough ball, slash a cross into the top to allow the steam to escape the middle so it bakes all the way inside OR to divide it into quarters, or farls, for griddle baking.  The cross  has no religious significance, or if it does I’d like to see a reference from someone who isn’t a detractor about the superstitious Irish. But in typical Irish fashion, we accept the venom of our detractors into as compliments. thus confusing them, and then start to believe our own press. Sigh.

And now for a recipe that isn’t particularly Irish in it’s origins, but turns out a really nice loaf in American kitchens.

1 cup all purpose flour (four cups of flour is roughly a pound – measure it by weight if you have a scale…..)

For Readers and Writers