I first learned about sourdoughs in elementary school  – they were the men who  went out to California prospecting gold out in ’49, and some of them ended up in Alaska, too.

This was a sourdough: 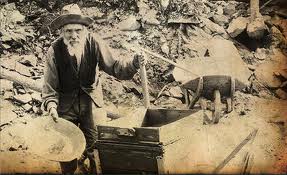 300,000 prospectors came West, and sourdough was the bread they made.Because of them,  this, too, is a sourdough:

Sourdough round from Boudin Bakery in San Francisco, using the same recipe since 1849.

the 49ers flapjack at OHP – another way to use sourdough

This Gold Rush was the 1898 Yukon Rush

and speaking of 49ers…

49ers are gnarly men looking for gold and/or a football team.

Sourdoughs are gnarly men looking for gold or a type of bread.

And I keep thinking, a bunch of guys, far from home and many fending for themselves for the first time ever, without a mother or a sister or a wife or a rooming house landlady or a nearby baker to buy their daily bread are figuring out sourdough without the benefit of modern science or a warehouses of stuff. Living in tents and working all day and drinking all night they MANAGE TO MAKE BREAD OUT OF THE STUFF. And we’re still eating it and talking about it.

The hard part, I think, is replicating these sorts of rough and inconsistent conditions if you’re a professional baker. Sometimes you have to wait, or adjust or the result is a little different – or a LOT different. The results are not always exactly the same. Fine for the home baker, not so fine for the shop baker.

So would you want to make a sourdough?

Is it the flavor? or the texture? The keeping qualities? The challenge?

was divvying up a lump of sourdough starter. I took a couple of tablespoons home in a Styrofoam coffee cup (I know, there’s a certain irony. Sometimes you use what you have, end of story) and I’ve been feeding it a little flour and a little water every so often ever since. It is now a cup full (large coffee size cup full) which is enough to use and enough to continue….the question is what to make? I thought I’d start with something quick, like English muffins, but it’s now ready to go. And I’m totally obsessed with griddle bread at the moment.

Does this sound totally casual? I certainly hope so.

There are TONS of books, articles and web resources for sourdough. Don’t let them scare you.

That whole staff of life thing.

Before we start baking we’re going to contemplate it a little, prepare our heads for what our hands are going to learn.

If you’re the I want to read about it sort, I’m not going to send you to the myriad sourdough places, but instead to

Bill Alexander bakes the same loaf every week for a year. THAT’S how to learn to bake bread. Remember, the first 500 don’t count.

Start with the starter