Mushrooms have been marked down and featured right at the front of the store lately, and I don’t I just love a bargain…..

And I love Mushrooms..

Someone had asked me for a pickled mushroom recipe recently, but I couldn’t find it because it was hiding in plain sight.

Why did I ever think writing things down and then trimming the paper exactly around it was any sort of plan?

Was there a great paper shortage in the ’80’s that has somehow escaped memory?

The paper it was on

And what else did I find in my studies?

There are more Nonna Marinated mushrooms stories out there then you could shake a stick at.

And they vary – from pouring a vinaigrette over the mushrooms, to cooking the mushrooms in lots of vinegar or wine . This recipe has you cook the mushrooms first and then pickle them. All good.

2 # mushrooms – we always used the little button ‘shrooms from the grocery story , because back in the day there wasn’t a variety option – anything sturdy. And no collecting your own unless you really know from mushrooms!

This recipe is just a written down version of how I remember doing this. I don’t even remember who told me how . It was always good to have some for the holidays. Or parties. Or any other time that called for nibbles or antipasto. Or because mushrooms were on sale. And because it’s Spring – at 33 degrees and it snowed yesterday.

We used to reuse just any old jar that had a lid…we all survived, but I buy Mason jars and new lids for them now, for the the things that aren’t just leftovers. 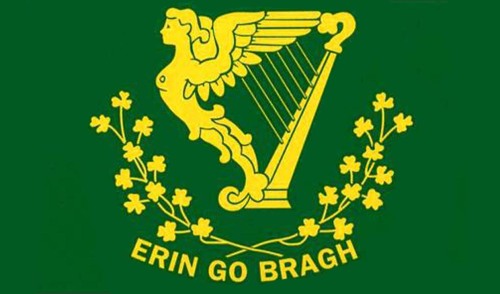 First, some follow up from Pi Days, part I…

Not the remaining Beatle..

Guess who has a new album coming out at the end of this month? Postcards from Paradise available 31 March 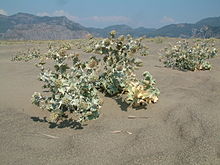 Ivan Day at Food History  has sooo much more on eringos – he’s cooked it…..

Perhaps you remember this from high school English class.

Sir John! art thou there, my deer? my male deer?

My doe with the black scut! Let the sky rain
potatoes; let it thunder to the tune of Green
Sleeves, hail kissing-comfits and snow eringoes; let
there come a tempest of provocation, I will shelter me here.

I hadn’t remembered that it was “Snow Eringoes” – rather apt for this endless winter. Boston has – and winter isn’t actually over, so, SO FAR received 108.6 inches of the fluffy white stuff and Plymouth has had MORE….that’s  nine foot of snow shoveling. I will add ‘snow eringoes’ (which Spellcheck would really rather be ‘snow dingoes’) to the general snow vocabulary.

But, on to apple pies to fry

Take apples and pare them, and chop them very small, beat in a little cinnamon, a little ginger, and some sugar, a little rosewater, take your paste, roul it thin, and make them up as big pasties as you please, to hold a spoonful or a little lesse of your apples, and so stir them with butter not too hastily least they be burned.

NOTES:What W.I, Gent is suggesting is that you

How to make Apple-pyes to Fry.

Take about a dozen pippins, pare them, cut them, and almost cover them with water, and almost a pound of sugar, let them boyl on a gentle fire, close covered, with a stick of cinnamon, minced orange pill, a little dillseed beaten, rosewater, when this is cold and stiff, make it into a little pastie with rich paste.

If you’re interested in more about Pies, there is a National Pie Council…it’s America, there’s a group for everything!

The Pies of Pi Day

I got to make pies, as part as a new program in the English Village :

So I picked  Parsnip Pies and  Apple Pies as pies that were seasonal in the 17th century and each had an important piece of the foodways story to tell.

Parsnips won’t have much green this time of year, and the rind will definitely need peeling. They are said to be sweeter after a frost. But in the summer, you eat them smaller, so it rather evens all out.

are one of the things you can plant in September and leave in the ground throughout the winter; they just keep growing, albeit slowly. They seed in their second year, so the won’t last through the warm weather – you’ll have to plant them again when the soil is warmer. You can enjoy them throughout the year.

Seeth yr roots in water and wine, pill them & beat them in a morter, with raw eggs & grated bread. bedew them often with rose water & wine, then streyne them & put sugar to them & some juice of leamons, & put it in ye crust; & when yr tart is baked, cut it up & butter it hot, or you may put some butter into it, when you set it into ye oven, & eat it cold. ye Juice of leamon you may eyther put in or leave out at yr pleasure.

are another root, long out of fashion, that seem poised for a comeback. 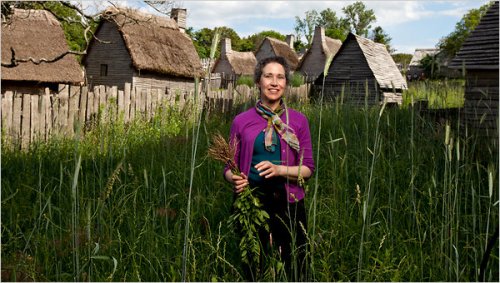 This is me, out standing in my field, holding skirrets for the New York Times in 2011.

Take the large skirrets, scale them and peele them and season them with Cinnamon and sugar, take good store of marrow and season it with salt and nutmeg then Lay your marrow in the bottom of your pye the your skirrets with some Citron and Ringo Roots when it comes out of the oven putt with sack or white wine caudle.

Almost forgotten at the back of a drawer for generations, Hannah Alexander’s Book of Cookery—which was first penned in Dublin in the late seventeenth century—has finally made it into print. First edition, 2014. Edited by Deirdre Nuttal. With an Introduction by Jennifer Nuttall née Alexander.

And then there were apples…..

Which makes me think of pie…..not just the circumference of a circle

but if you’ve applied to MIT, there’s the other pi to consider

Since March 14, ’15 is also Opening Day for Plimoth Plantation there will be some pie there, too, in the 1624 English Village. 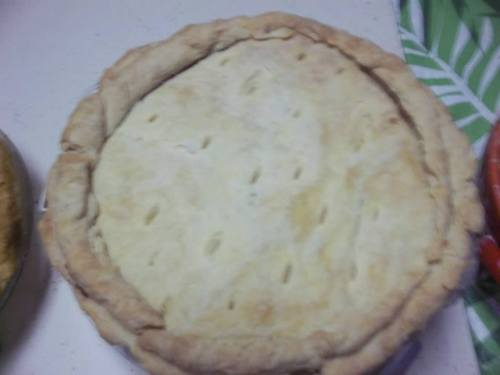 Parsnip Pie – minus the 21st century pan – contender for Pi Day 1624. It has to be seasonal as well as 17th century 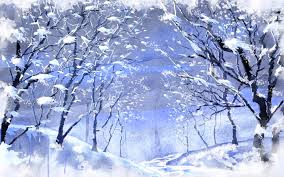 Winter Wonder-is this snow ever going to end-  Land

It started snowing again. It wasn’t supposed to start for a couple of hours, AFTER I would have finished writing…and now I’m totally distracted.

It’s not like snow is food….except sometimes when it is:

And the way is thus –

Think not of this snow, but the next snow.

Where will the next snow go?

This snow must go beyond next snow.

Always shovel for the next snow.

I’ve been making English muffins, some good, some odd, some far too large, and I think I’m closing in on the muffin that will not be just English, but mine.

March 1st is the Feast of Saint David, patron saint of Wales, also known as Saint Tavy – he’s the leek saint. I’ve been making leek and potato soup and I’ve got a great little book titled

First You Take A Leek 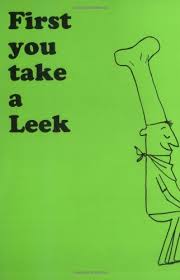 You can buy this on Amazon – some of this stuff I just can’t make up!

But I’m not writing about that, either, because there is snow falling, and it distracts me and takes my attention.

Should I start shoveling now? Should I wait? Is it fluffy snow? Is it heavy? Do I have enough salt for the stairs and the sidewalk?

Even at night when it’s not snowing, huge heavy trucks have been driving by, shifting gears on the slight incline in front of my house, slowing down to take the corner at the next street three houses down, no rest for the snow weary.

This would be a much quieter snow truck, but this truck has not been in my neighborhood. 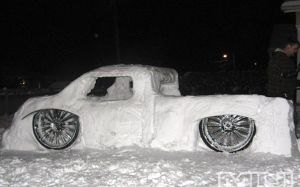 This snow truck – unless it’s really a snow car – we have several of these in the neighborhood.

Trixie Belden awoke slowly, with the sound of a summer rain beating against her window. She half-opened her eyes, stretched her arms above her head, and then, catching sight of a large sign tied to the foot of her bed, yelled out, “Rabbit! Rabbit!” She bounced out of bed and ran out of her room and down the hall. “I’ve finally done it!” she cried […] “Well, ever since I was Bobby’s age I’ve been trying to remember to say ‘Rabbit! Rabbit!’ and make a wish just before going to sleep on the last night of the month. If you say it again in the morning, before you’ve said another word, your wish comes true.” Trixie laughed.”

Somewhere in my childhood – my life before junior high, say – I had started reading Trixie Belden, and specifically, this  Trixie Belden, the one with the Rabbit/Rabbit chapter. Trixie says two ‘rabbits’; others say three rabbits…

And once I had read it, rabbits popped up everywhere….Flopsy Bunnies 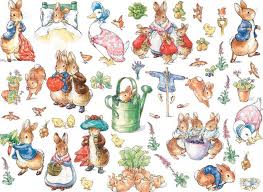 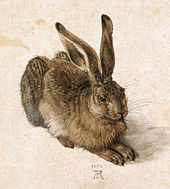 This image is titled “The Bugs Bunny Classic”

Notice how I’ve avoid any reference to March Hares…..

There is one other rabbit, though.

She was JR before Dallas and that JR….

When we were in junior high, we had secret code names…she was Jolly Rabbit because her initials were JR and I was Quail because, well, say kwall real fast –  it makes it own sort of sense.

So many of my Judith memories are connected to food – we enjoyed a lot of meals together – tuna sandwiches, and blueberry pancakes and blini and horseradish testing and experimental soups and and and and and…..

March is (was) her birthday month.

If you’re remembering someone, they’re still in the present tense, right? Even if they are no longer present?