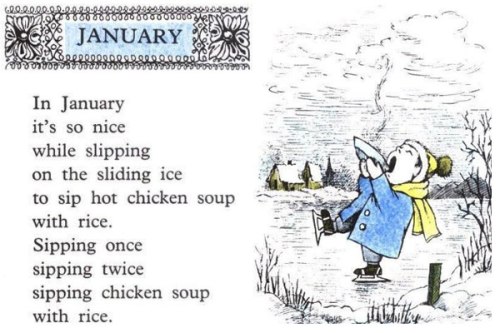 Chicken soup is also an easy (and cheap….I mean economical and low waste) way to have the same chicken twice. Feel free to eat as much of the meat as you’d like.

First – you need chicken with bones in it. Don’t eat the bones – they’re the part that’s needed for making the broth.

1 roasted chicken (it could even been the Friday special rotisserie chicken form the grocery store.)

some/all or none of the following:

a sad little carrot or 2

an onion – left whole, with maybe a clove or two in it. This could be a sad little excuse of an onion….

a lemon ….in short, look in the corners of the fridge and find the sad, the limp, the forlorn, the orphaned and rinse them and toss them in the slowcooker.

and years of lazy experience.

Now, if you don’t have a slow cooker, you can use a heavy bottom soup pot, bring it to a boil and keep it at a low simmer again, 6, 7, 8 hours and then strain, season, use.

And if you want to start with your own chicken, here’s Grandma B’s Chicken Soup with Dumplings

Several outside stalks of celery-Tied

Take chicken out & debone – if desired

DUMPLINGS – Mother called them sinkers they are hard

Flour – stir in enough to make the dough really thick. Then add a couple Tbs of Top broth (2 or 3)

Drop into soup by a teaspoon – cook until they are cooked through.

Bone Broth has been in the news lately – even the New York Times has had this  story. One of the people they quote  is Sally Fallon, who was advocating Bone Broth (and real fats!) years ago. I met  her at a conference/meeting of the Weston A. Price Society. I got a copy of Nourishing Traditions, which is a great primer for all sorts of truly natural and traditional foods. I had hoped to finally conquer yoghurt……

This book was published in 2003, and I think it was fairly newly out when I was at the conference – which means it was over 10 years ago. How does time fly by like that? Still can’t make yoghurt.